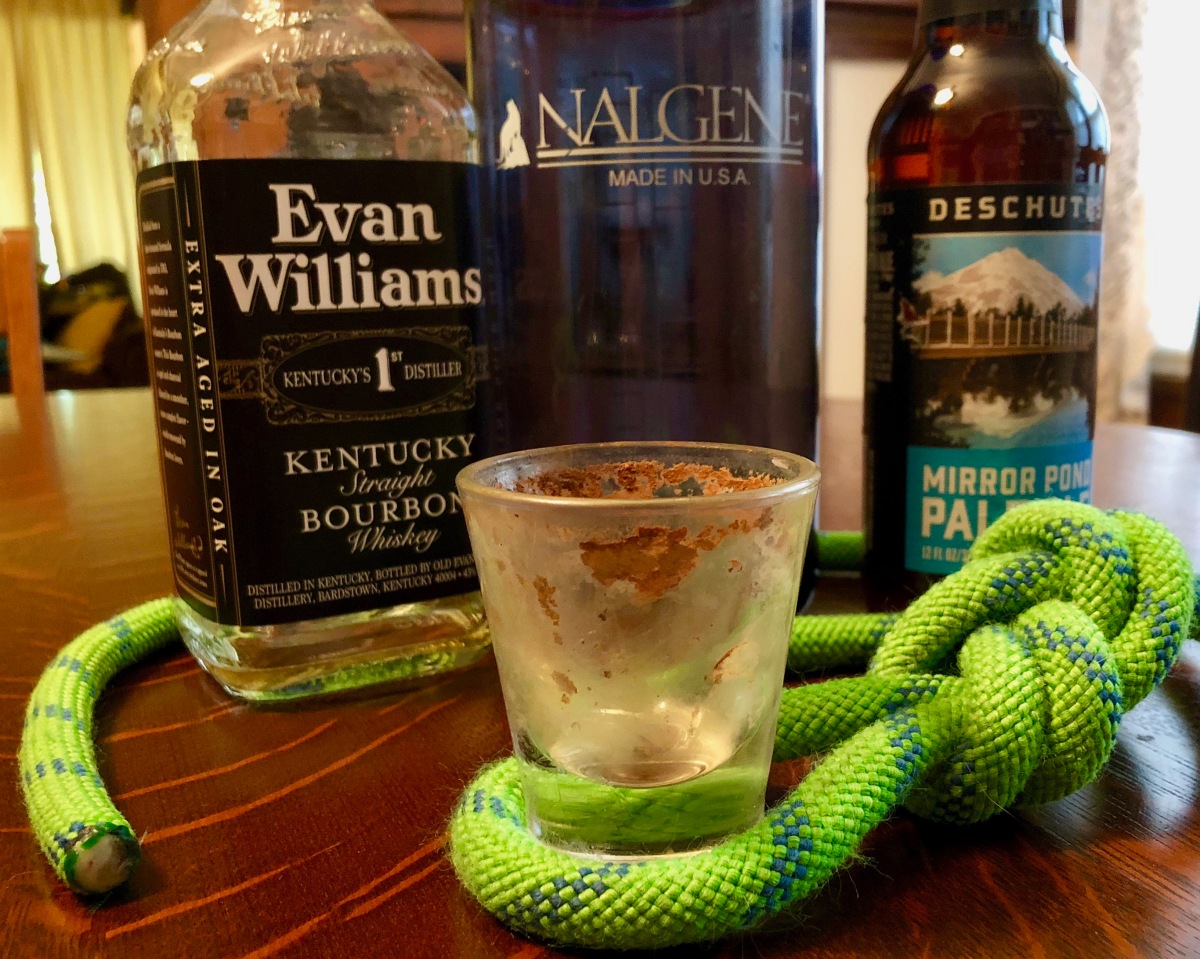 We returned what was left of Rick’s earthly remains back to the Earth this weekend.  We stood in a loose circle on a washed out forest road, sharing more stories of Rick. We took a few photos with him in a Target bag, kind of appropriate, as he often seemed to be the target of mountain wrath.

Patty then pulled the box with Rick out to prepare for spreading his ashes, adding some ashes from his mother Marie Ernestine, better known as Ernie to most.

It was a sack full of what everyone commonly calls ashes, but it is really more like a sack full of the more substantial bits and pieces that his human form was attached to all his life, with a little bit of dust mixed in.  It was surprisingly heavy, very unlike the light, fluffy ashes you get used to from a campfire.

I appreciated the heft of it.  It gave substance to what was left of the body that once carried the spirit of this man around for 60 years.  They say an adult male is about 60% water. Rick may have had a bit more bourbon mixed into that percentage, but even bones are 31% water so I just assumed the ashes would be light, or at least not heavy, with all that water and other easily combustible bits gone.

So it was surprising, yet comforting, to feel the weight of my old buddy as I held him one last time to say a few words.  I had often held his weight as he dangled on the end of a climbing rope and it seemed familiar.

Patty asked if anyone wanted to speak, so I opened my mouth to say something meaningful, really to just say anything at this point of inferred importance in someone’s life… but nothing came out.  I was overcome with yet another burst of grief, like I have experienced over the months since he died.

I had, of course, thought about what I might say…why I picked this particular point in the Olympics, how full of life Rick was, all the adventures, how much I will miss him, but I could only stand there silent for a few minutes, trying to will myself to get a few words out…

Patty had asked me to pick a place Rick would like for his physical remains a while back.  While we had traveled all over the state, the Olympic Peninsula had been our back yard for decades of adventure.  We had hiked the entire ocean beach in Olympic National Park, camped alongside nearly every river, hiked days into the deepest, hardest to reach interior sections and even reached the highest point, Mt. Olympus. But there was one spot that we went back to regularly…Mt Ellinor.

On the southern edge of the Olympics, Mt. Ellinor is an excellent climbers trail with great summit views and is only an hour from Olympia, so it became our traditional “season opener” in the early spring for getting back into mountain climbing shape. We would run up it all seasons of the year, but as soon as the snow was melted enough to get a car close to the trailhead we would be off and running.

I have no idea how many times we did that hike, but many, many, many times. We would use it for gauging how accessible other early trails might be with snow and just for the shear joy of getting up high in the mountains.  We would even dash out there with Rick’s dogs for a quick afternoon blast up to the top, look for goats, ring the summit bell and dash back down for supper.

In our early days we would often have the mountain all to ourselves, but it has become more and more heavily used and these days you can barely find parking at the trailheads. In choosing a spot, I kept this in mind for both privacy and practicality, as not everyone would be up for a summit climb. The roads are narrow, potholed, and washboarded with small pullouts.

Just past the turnoff for the trailhead for Mt. Ellinor is the trailhead for Mt. Washington, another, much more serious alpine effort. While Ellinor is a steep hike with some scrambley bits, Mt. Washington is the big-brother, a real climb needing true route-finding skills through sections where someone can get really hurt when snow covers the peak. We have done Washington a number of times as well and it is one of our favorites. 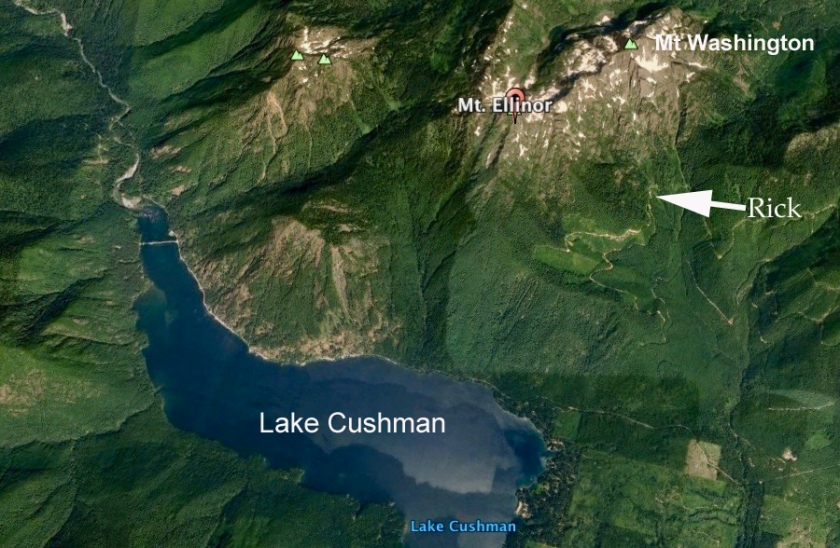 Continuing on Forest Service road 2419, just beyond The Mt Washington trailhead, which is really just a boulder next to the road with no signs, the road bed has been washed out and impassible for many years. A short hike past this washout is a nice tall waterfall with a scenic view of the valleys below, as the stream tumbles noisily down the steep slopes into Big Creek.

I thought this place would be perfect; more private than the trailhead parking, easy to access, not too long a drive from Olympia, short hike, scenic view, waterfall, splashing stream, and at the base of two of our favorite climbs. Perfect.

After choosing the site I believed to be a perfect fit, self doubt starting creeping in. Was it majestic enough for a final resting place?  Should it be a mountain summit or crashing ocean waves on the coast instead? Will there be a locked gate preventing us from driving up there on the Forest Service road? Would the weather cooperate?  Would everyone think I was an idiot for picking this spot?

These are the thoughts that were running through my head as I stood there taking deep breaths and trying to calm myself enough to be able to speak. I can’t remember exactly what came out of my mouth, but I began to talk at least, trying to express some of these notions, mixed with the dark humor we practiced on many of our climbs.

I had brought a shot glass that I have been keeping topped off on my whiskey shelf, for Rick, since the day he died. As it evaporated, I thought of it as Rick lazily sipping his share of bourbon, and as the level eased down I would top it off with whatever I was drinking so it never emptied. He was very thirsty when the weather was hot, as usual.

I pulled the Cling-wrapped glass out of my pocket, removed the wrap and handed Jim the bottle of Evan Williams I had brought. Now, Evan Williams is one of the bourbons we cut our teeth on in the 70’s, along with Ezra Brooks, and that we continued to enjoy even after we started enjoying the top shelf whiskeys. They were relatively cheap, good octane, and tasted better than the other bottom-shelf whiskey like Jim Beam and Jack Daniels. Yes, we considered Jack to be bottom shelf.

Jim filled the shot glass, me making sure he topped it off as I know Rick would not want to be shorted on his shot.  I spoke a few more words, irreverent I’m sure, and poured the shot into the bag of ashes.  I won’t swear that I heard Rick give his whiskey-shot follow-up call, but I felt it.

We then passed Rick around to each person that wanted, or was able, to say a few more words or share a story.  I’ll let them share their owns thoughts and stories, but Jim added some higher-end bourbon from the traditional Nalgene trail bottle and Tom shared his Deschutes Pale Ale and other goodies as they spoke a few more irreverent words, as only climbers that have shared danger can, quenching Ricky’s thirst a bit more.

Patty and Zach spoke much more reverently, others declined, there were more tears and more smiles shared and so when Patty asked “what now” I declared it was “time to dump his ass out!”.

Patty carried Rick over to the base of the waterfall and poured him into the stream, declaring that mixing him with the water returned his physical form back to the living cycle of the Earth. I took a good pull of the Evan Williams and passed it around for everyone to have a sip.  I took the rest of the bottle and poured it over his ashes.

I had given Jim and Tom, Rick’s other long-time rope partners, a piece of the first “real” rope I had purchased back when I was in the Army in 1980.  Rick and I had done many climbs with that rope, including his first summit of Mt. Rainier.

I had tied a re-woven figure eight in each one. This is the knot every climber ties to their harness to connect them to another climber. Jim decided to tie his piece of rope to a small tree over the stream, and proceeded to show us he had forgotten how to tie his mountaineering knots and create a solid anchor. Tom followed suit, tossing Jim his rope as we joked about his knot tying prowess. I’m too sentimental about that kind of stuff. Someone will be deciding why I have a hunk of old rope and what to do with it after I’m gone.

We told a few more stories, sipped a bit more brew and bourbon, took a group shot and then headed back down to Olympia while Tom headed up to do Ellinor.

I don’t know about everyone else, but with all the emotions and love shared, in a spot where I can easily imagine him standing there taking a sip of bourbon, it was perfect at least for me. I believe Rick would think so too, it was so much more “him” than a formal funeral.

I will be back up to share a sip or two with him from time to time, and he’s not hard to find, now that you know where he rests.

One thought on “Ashes to ashes, this is not just dust…”