The day Rick died, his brother Matt posted that he had passed away that day on a hometown memorial page. It is one of the things that got me thinking about documenting some of the stories as it was swarmed by well-wishers for a couple of days and then rapidly moved down the news feed for that page.

No judgement, that’s just how things are in Facebook group land…the group is only as fresh as the latest post and time quickly moves on.

Still, 66 brief posts of the “Sorry for your loss”, “Prayers” and the odd message of someone actually mentioning a memory about Rick made the response rather anemic feeling for me.  I get it…the site only has a few thousand members and only a few would have really known Rick for the time he was in high school or lived there.

Curious and kind of hoping for more notoriety for the passing of my buddy, a few days later I went to one of my Hiker/Climber groups and made a quick post amongst “or people”. 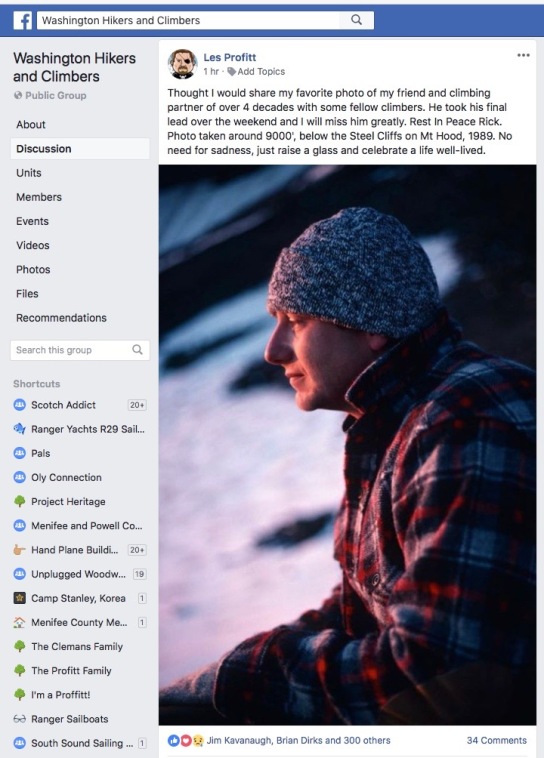 What happened blew me away a bit, as my computer starting blowing up with over 300 people responding in less than an hour.  Ding, ding, ding, ding, ding.  Eventually, the responses grew to almost 900 people until the inevitable moment where the post reaches the critical spot where it is too much trouble to scroll down that far and view older posts.

Now, there was some competition, since, at the same time I made my post, the one below was posted and began ticking the likes, loves and wows. I take some comfort that it took 3 hours for the poster to hit her 300, even with the cute mountain goat and bikini competition. The old goat still had a move or two in him. 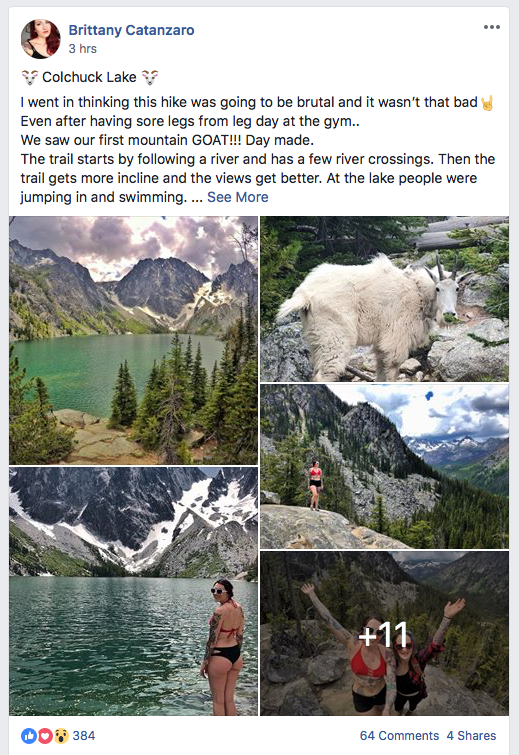 What impressed me the most, was it was a response to someone none of them had even met.  While there were a few “sorry for your loss” type posts, the majority were celebrating the life of one of their own… an adventurer and seeker of something more up in the mountains and wilderness.  They grasped that it was a life well lived and not one viewed from the sidelines.

At the same time it was somehow comforting to see that the subject matter of the other post, Colchuck Lake, was a place Rick and I had been to many times and never tired of the wild looking mountains begging to be climbed and the serene lakeside offering relative peace and comfort from the intensity of being up on the rugged crags.

Seeing younger folks experiencing it for the first time, just as excited as we once were, gives a continuity to the community of hikers and climbers that can only be experienced by being “one of us”.