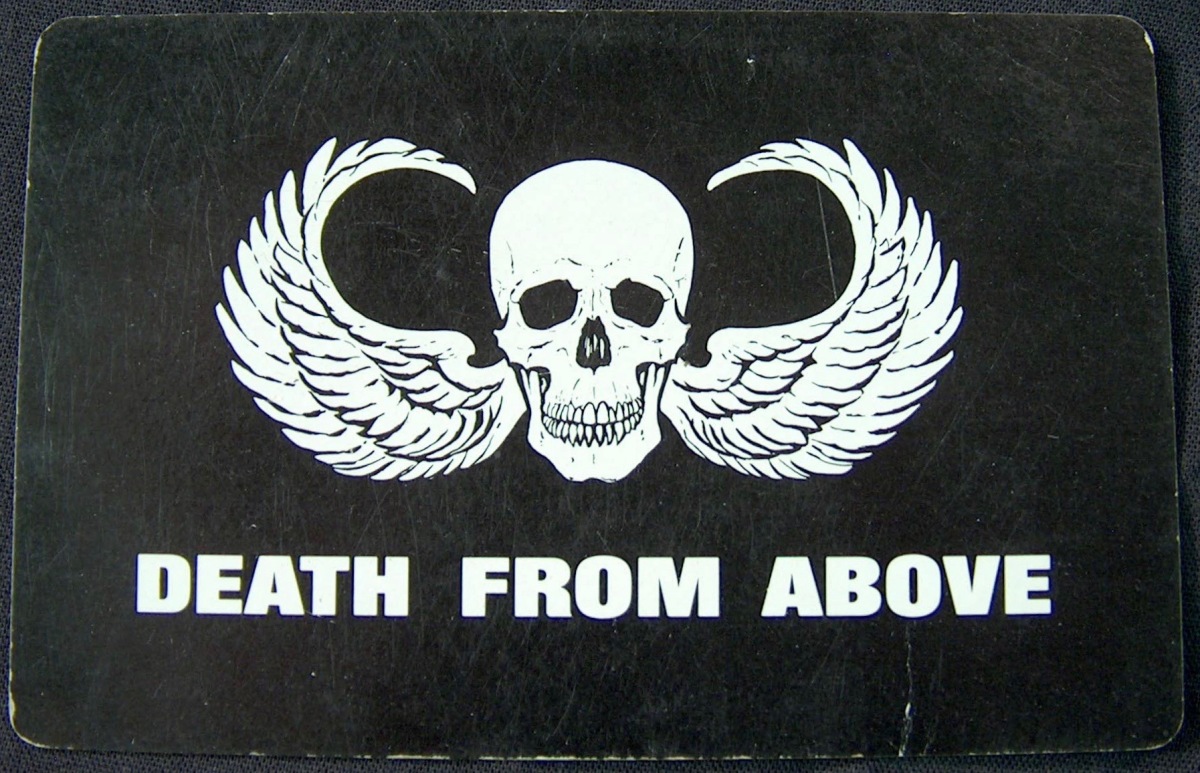 I never know what memory might happen to pop into my head at any given time. While I used to just ruminate and ponder on them for a few minutes and move on, these days I try to at least make a few notes on my iPhone for a story idea to be developed later.

The older I get the less I am able to run easily through my memory banks with total recall…it takes some more pondering and work to coax the memories back.  These playing cards popped into my head the other day and the first thing I did was go to eBay to see if I could find one of the cards to add to my small bookcase of dad’s military mementos. I found they were very rare, but I did find some information I was unaware of.

When dad came back from Vietnam in the summer of 1966 he brought several duffle bags and a foot locker back with him. These were filled with the paraphernalia of a soldier and stored away along with another 20 years worth of soldiering in an area underneath the stairs that was commonly called “The Cave”, as it was not easily accessed and you had to crawl in on your hands and knees.

Naturally, this was attractive to us kids as we could grab a flashlight and secretly dig through all kinds of cool stuff we weren’t supposed to touch. One of the things in the footlocker was a number of playing card decks like the one below. Having skulls, we naturally thought they were very cool and swiped a deck or two to play with. We thought it was weird that some of the decks only had 52 aces of spades, but some were just regular playing cards.

When dad starting finding them spread all over the house we got a spanking and told that the cards were special and we needed to leave them where they were.

We didn’t know why they were special, we just thought they were cards and there were several decks.  As we got a little older the story came out that these were “Death Cards” from Vietnam used by soldiers as calling cards and left on dead enemy soldiers to let the Viet Cong know who they were up against.  Well, that only made them more desirable since we constantly playing Army all over the neighborhood… so we started leaving a card on enemy neighbor kids as we “killed” them.

Most of my life I just assumed these cards were used by the entire 1st Cavalry Division and were probably still very common.  I have learned since the cards were designed by Captain Mozey, the commander of Charlie Company, my dads unit, and were unique to the men in the 8th Cavalry “Jumping Mustangs”, which were an Airborne/Air Assault unit, hence the “Death From Above”.

Here is some historic information I discovered while researching the cards written by retired Sergeant Major Herb Friedman, who researches and collects death cards:

There is a confirmed report that this card was designed by Captain Mozey of C Company, 1st Battalion of the 8th Cavalry Regiment “The Jumping Mustangs” during his Vietnam tour of 1965-1966. A member of the unit told me that:

The calling card was placed on the chest or tucked, slightly, in the shirt pocket.  But as I said before we did not use it except to say “We were here.” The actual “Death From Above” saying was a WWII phrase. As of August 1966 the 1st & 2nd of the 8th “Jumping Mustangs” were all carrying a deck of “Death From Above” cards.

I can confirm that the “Death From Above” card was designed by Captain William B Mozey in either late 1965 or early 1966. When Bill took over the company the nickname was changed to “Death From Above” and the unit members got a full deck of the playing cards along with a Black Silk scarf with the “Death From Above” and airborne Skull on it. The phrase was banned in the Battalion Area, so the guys said “DFA” until the brass figured that out. It was an Article 15 offense to say either. The company was broken up at least 2 times because of “DFA” and the cards and scarves disappeared, but returned in 1968 when I was with the company. Only Charlie 1/8th Cavalry was known as “Death From Above” at this time. The other companies had their own nicknames as did all the companies in the 1st Air Cavalry Division.

Although Mozey has been credited with designing the cards, it appears that he had them printed in the United States. One complete deck was found in an old foot locker and the cards turn out to have been printed by: Brown & Bigelow, St. Paul, Minn., U.S.A. Text on the actual deck adds the following information: The Business builders, 55164, A Saxon Industrial Company.

Brown & Bigelow of St Paul, Minnesota, was a leading producer of playing cards in the U.S. from the late 1920s to the 1980s. Brown & Bigelow manufactured playing cards under several brand names, as well as novelty and advertising decks. There seems to be no record of them producing Death Cards, so perhaps because of the political situation in the United States the company chose to keep their participation in the production of these cards quiet.

Former Specialist Fourth Class Vic Castle told me that when he arrived in Vietnam as a member of the 1/8th Cavalry on 1 May 1967 they showed him the death cards and black silk scarf and told him their use was prohibited. He says:

The clerk calls out my name. I get in Jeep for short ride to 1/8th Cavalry. There is a large sign that says, “1/8th Cavalry: Airborne, Air Assault, Air Mobile.” Out walks this Sergeant who greets us. I tell him I think there has been a mistake. I haven’t had Jump training. He says, “Don’t worry about it; we don’t give you a damn parachute anyway. He assigns me to A Company. He shows me the Death card and the “Death From Above” black scarf and tells me if I get caught with either it is an Article 15.

He remembers that some unit members were court-martialed while using the cards. He said:

I was told that the men were carving a Cavalry patch on a dead Viet Cong’s chest and stuck the playing card in his mouth. There was a soldier from an engineer outfit there and he took some pictures. He sent them back to his father who apparently was not amused. An investigation followed and then a trial of a First Lieutenant and a buck Sergeant. I think the trial was held in St. Louis and both men were sent to Ft. Leavenworth.

It seems to me that the two men were tried for abusing the body of the dead Viet Cong rather than the use of the death cards. Such charges have occurred in Iraq and Afghanistan. It seems perfectly acceptable to shoot a terrorist a dozen times or hack him to death with a bayonet, but abuse the body in any way afterwards and it is a criminal act. How strange.

Curiously, the “Death from Above” death cards reappeared again 30+ years later when American troops were sent to the Persian Gulf during Operation Desert Storm.”

“There exists another form of these cards. Brown and Bigelow out of Minnesota produced them.  William Mosey had them made when he was with the CAV in VN. The cards were done in full decks of regular suits and also ace of spades only. I have two of which were gifts from the Colonel when I was a boy. The cards are all black background with a winged skull and DEATH from ABOVE. The Colonel coined this phrase and had a unit flag also made. If I remember correctly from my conversation with him the director of Apocalypse Now had to gain permission to use this in the film from Col Mosey. Over the years the Col. has given all the cards away.”

I find the background of all this fascinating, as it has been part of my life for over 50 years now.  I even wrote “Death From Above” on my climbing helmet back in the 90’s as a sort of karmic dare to the powers that be, as rocks falling from above was one of the more common dangers we encountered while climbing.

While these were just playing cards, I shudder to think how many of mom and dad’s mementos we destroyed over the years when we were kids. After a while all the cards had been lost or destroyed, but there was much more.

There were some cool old suitcases that had stickers of where they had traveled stuffed full of cool stuff they had stashed away, like mom’s old brown army boots, both their uniforms and patches, medals and other hard won awards, post cards and various souvenirs, leaded crystal from Austria, and on and on. We were a half dozen destroying locusts devouring everything in the house. At least the internet allows us to reclaim some some of the bits and pieces of our history.

9 thoughts on “Death From Above”